The cannabis consumer is typically characterized as a “stoner” – a lovable, slacker with no ambition wandering around in a high stupor. So, it’s pretty unusual to read the account of a sober millennial working in one of the biggest cannabis companies in the country.  Jackson D. Tilley’s full-time job is the vice president of strategic partnerships and communications for Organa Brands, a vape company that has sold over $100 million in cannabis products.  Somehow, he has found time to write this book Billion Dollar Dimebag: An Insider’s Account of America’s Legalish Cannabis Industry.

“The book is being published by Post Hill Press, and will be distributed by Simon & Schuster.” It is available now for pre-orders at www.billiondollardimebag.com and it is a true story of being at the right place and the right time for success in the cannabis industry. Tilly started as an intern at O.penVape in Denver Colorado in 2014 just as the adult use cannabis industry began to take off.

O.pen.VAPE is owned by Organa Brands, which just announced the acquisition by Slang Worldwide (SLNG). By logging long hours, massive amounts of travel and lots of hard work, Tilley rose through the ranks to his current position. The book chronicles the changes in the cannabis industry as the stigma quickly fell away, but also highlights the constant challenges that cannabis companies endured along the way.

“Working in public relations for so long, I’ve become fascinated with the ways in which people absorb content and internally assign meaning to it in their own lives,” said Tilley. “You see a lot of people rallying against our industry, repeating the same talking points they were using decades ago. And then, on the other side, you had people who were totally in favor of legalization but still painting the industry and community as a bunch of burnouts.” Tilley said he was motivated to write the book because his experience within the industry wasn’t something that those outside the industry saw. Primarily – really brilliant people taking risks with their careers to advance the cannabis industry. 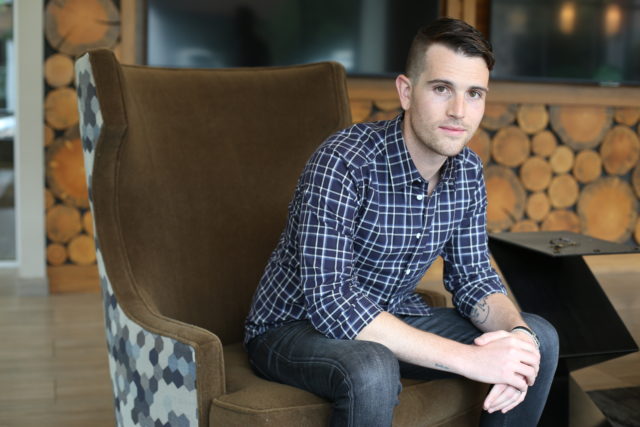 Attend any cannabis event in a fully legal state and you will inevitably be offered the product to consume. Corporate events are  known to give the product away for free in gift bags and cannabis is easily accessible. Imagine being sober in this environment. Tilley said that was another reason why he wrote the book, “I’m sober and gay and work in the cannabis industry and that combination is pretty rare,” he said.

However, ask any person working in corporate cannabis and they will tell you how the hours are long, very long. People will often approach a cannabis executive and suggest how awesome it is to work while getting stoned all day. Many will say, if I got stoned all day I’d never get anything done.  It is close to impossible to build a solid company if you spend the day stoned.

“I think sobriety is becoming a more interesting topic to a new generation of people, and I wanted to develop a piece of writing that really illustrates the notion that you don’t need to consume cannabis to fully support its legalization,” said Tilley.

Why Do You Need This Book?

If you think you don’t belong in the cannabis industry, this book could change your mind. Tilley said he’s hopeful that people will read his book and find that working at a cannabis company isn’t like working for a drug dealer. He believes the book is helpful for people both outside and inside the cannabis industry.

Tilley said, “For me – company culture is everything. If you have solid core values for your organization, and you stick to them at every decision point, you can succeed. You can retain talent. You can make sure everyone is working toward a common goal. You might be able to have a successful company without that culture–but what might it cost?”

According to The Hollywood Reporter Simon & Schuster will distribute in hardcover and e-book format, while Tilley has also struck a deal with Audible for the audio rights to the book with Tilley on board to narrate. The book is expected to hit the shelves on September 17.

Here’s why everyone in the #cannabis industry should be careful about #payment #processing after former @eaze CEO J… https://t.co/DbptX6cRcm

The cannabis community is certainly pleased to see that the state of #Virginia has legalized adult-use cannabis, bu… https://t.co/3BHtenqiei