As Canada launches its adult use cannabis sales, the focus from investors has been on production size and facilities. Canadian cannabis companies have been racing each other to claim the crown as the biggest producer with the largest facilities and greatest yields. The industry north of the border has seemed to ignore the lessons already learned in the U.S. when there is a race to produce more than is needed.

Jonathan Rubins of Cannabis Benchmarks said, “We have been observing and assessing prices in multiple U.S. markets for over three years, and we have watched a steady erosion of prices in the most mature, competitive markets – specifically CO, OR and WA – as greater production capacity, innovation in technology and production techniques, and improved supply chain management have driven wholesale prices down.” His company diligently records the prices of wholesale cannabis and this is what they’ve seen: 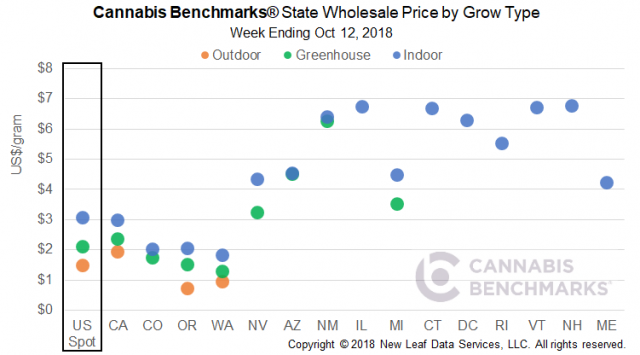 Rubin noted that cannabis investors have pushed the Canadian company stocks to lofty levels as the companies raise millions upon millions of dollars to fuel this production expansion. “However, investors appear to be betting more on potential future valuations than on fundamental analysis, and there seems to be greater weight being put on a company’s production capacity rather than the value of that production and how its value may change over time,” he said.

If the Canadian analysts have used Colorado as a guide for consumption per person data, Rubin believes they can’t ignore the pricing side of the equation.

“Some companies are being rewarded with higher valuations for pursuing a strategy of vertical integration as a means of controlling exogenous variables. We are not aware of a single commodity-based industry in which vertical integration resulted in the best long-term results,” said Rubin.  “Simply put, vertical integration reduces the ability to hedge various aspects of the business with other industry participants and requires companies to be best-in-class operators in every segment of the value chain.”

previousOur Neighbor to The North