Despite legalization continuing to spread, and efforts advocating towards federal legalization of cannabis, the black market in the U.S. for cannabis continues to thrive across the nation.

Simply put, despite access and legal product being available, people are still as or more likely to purchase their cannabis from black market sources, with this trend not showing any signs of stopping.

Consumer Research Around Cannabis, a U.S. research company specializing in data for the cannabis market released data from a survey that tracked where people were sourcing their cannabis in many major U.S. states.

Here are just a few snapshots of cities, and where their citizens are sourcing their cannabis, in some of the legal recreational states:

Comparison of Legal and Non-Legal Purchase of Cannabis Among Adults 18+ in Four US Markets Where Recreational Cannabis Purchase Is Legal, 2018 and 2019

Massachusetts recently legalized adult use cannabis sales and BDS Analytics believes that its black market sales will fall from 90% in 2018 (when recreational sales were illegal) to 76% in 2019. However,  the state has been slow to issue adult use licenses to retailers. Until the dispensaries are open in larger numbers the black market consumers aren’t likely to make the switch if it is inconvenient.

Here is a snapshot of cities, and where citizens are sourcing their cannabis, in some of the legal medical cannabis states, showing a trend of an increase in illicit market purchases:

In these medical states, illicit purchases, according to this survey, slightly declined:

Comparison of Legal and Non-Legal Purchase of Cannabis Among Adults 18+ in Four US Markets Where Only Medicinal Cannabis Purchase Is Legal, 2018 and 2019

The trend is clearly showing that where legal cannabis is available, people will purchase it, yet, they are still as comfortable, if not more, sourcing cannabis from the black market despite the rise in legalization.

The Cases of California & Colorado

This being said, California’s illicit market stands out as one that will never be snuffed out.

In comparison to Colorado, which has 562 licensed cannabis stores, California has only 620 licensed stores, despite being six times the size of Colorado. This number is 10% less than what was expected when the state legalized.

According to a 2018 Eaze report titled “The High Cost Of Illegal Cannabis”  1 in 5 Californians purchased cannabis from the illicit market. In addition, Eaze found that 84% of those are highly likely to repeat that behavior in the future due to the illicit market having cheaper products and no tax.

At the same time, despite being the first state to legalize cannabis and cannabis being widely available, Colorado’s black market is growing, with much of the cannabis that is being grown in the state being sent to other illegal states where there is greater profit potential.

With each state facing challenges to get consumers’ buy-in to legal cannabis markets, there are some common barriers inhibiting legal market participation, including:

Despite being the first G7 country to legalize cannabis at a federal level this past October, Canada’s black market is growing stronger than ever.

Scotiabank analysts Oliver Rowe and Ben Isaacson calculated in a research report that the black market in Canada could control 71% of all cannabis sales in 2019, but they expect that figure to drop to 37% by 2020. In the report cited on BNN Bloomberg, Scotiabank said, “We forecast illicit conversion will be swift, although limited form factors and potentially limited supply may keep 2019 low.”

The analysts believe that packaging and regulatory red tape issues will be resolved and that will curtail illicit sales. However, that would mean that over 30% of the cannabis consumers buying in the black market would then shift to legal purchases within a year. That’s a big move in a short amount of time.

People cite waiting for the kinks of legalization to be ironed out as well as pricing as the biggest reasons they don’t turn to the legal market. 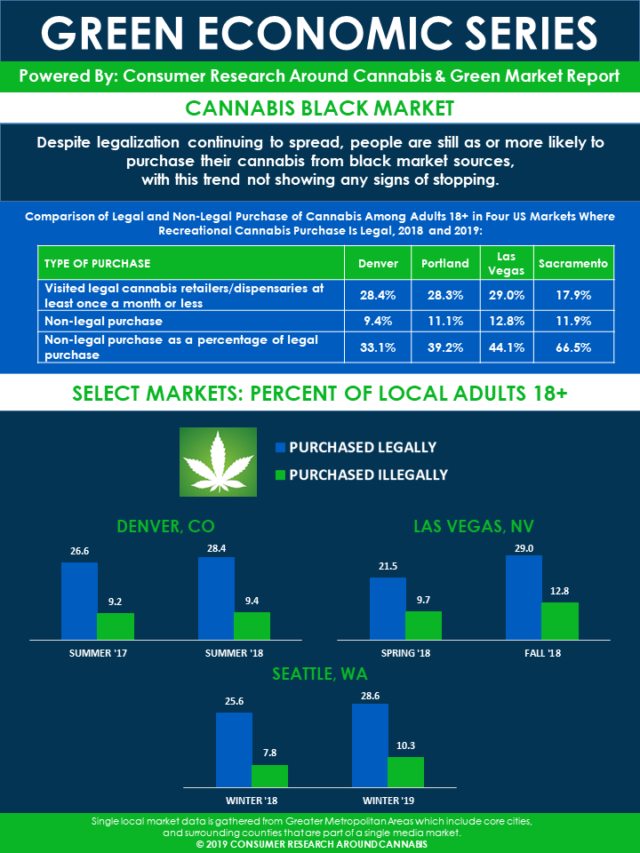 nextHEXO Sales Fall In Third Quarter For Both Adult Use, Medical Cannabis