Touchdown: Cannabis Consumers Prefer the NFL Over all Other Pro-Sports

Profile of the Cannabis Consumers within the D.C. Market Influencing Federal Government

In a new study we have conducted in conjunction with Consumer Research Around Cannabis, we found that 43% of people who bought legal marijuana chose McDonald’s as their go-to place to eat fast food when experiencing the munchies.

The study was conducted over several marketplaces across the United States with a base population of 55 million.

The study also dove deep into people who purchased cannabis from a legally authorized dispensary, which was 4.7 million or 8.5% of the population. 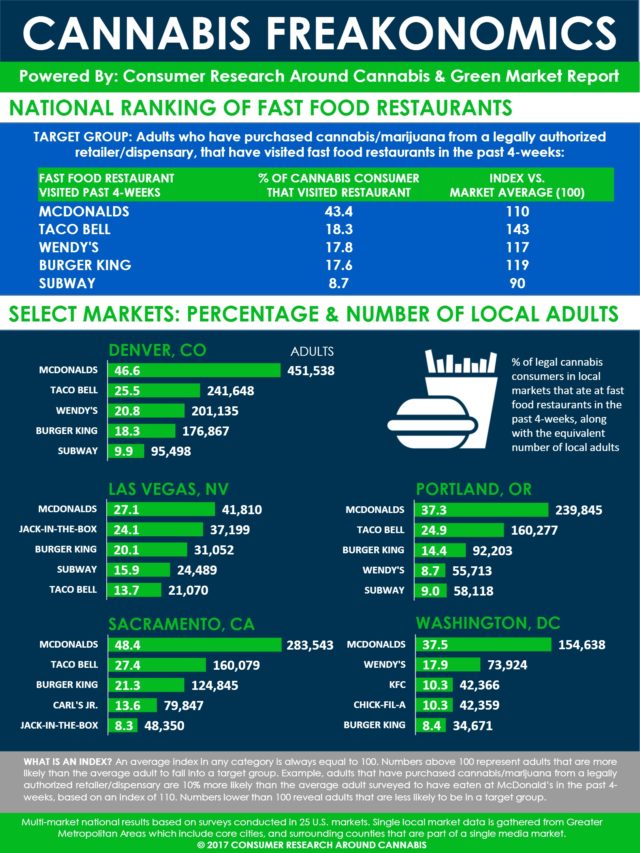 In the past four weeks alone, 43% of those marijuana customers said they ate at McDonald’s. The second most popular place to eat was Taco Bell, accounting for only 18% of the cannabis consumers.

Wendy’s came in third place with 17.8%, just barely beating Burger King at 17.6%. Subway ranked in fifth at a tiny 8.7% compared to the previous four spots. Kentucky Fried Chicken hit the list at number six with only 5.5% going to eat there over the past four weeks.

The additional fast food names in the top ten list were Arby’s, Chick-Fil-A, Jack-In-The-Box and Carl’s Jr. (in that order).

“McDonald’s wins by virtue of the sheer number of locations – by default really,” said Jeff Stein, Vice President of Consumer Research Around Cannabis. “Those competitors which better understanding cannabis users and their consumer habits can certainly close the gap by integrating what they learn through their marketing efforts.”

As cannabis is known for its appetite inducing side effect, which is one of its most beneficial qualities for those suffering from diseases that hinder appetite or take medication that make it difficult to eat, understanding the spending habits of consumers is critical.

The new report is part of a series of research market snapshots called “Cannabis Freakonomics” that covers data collected by Consumer Research Around Cannabis.

“The data that we have collected has unveiled a ton of interesting findings that we would like to share with the industry,” said Jeffrey Stein CEO of Consumer Research Around Cannabis. The data reinforces some stereotypes of cannabis consumers, but also reveals some surprising findings.

As we continue to unveil the consumer economic behavioral secrets of cannabis users, we will provide the updates here on Green Market Report. In the meantime, consume wisely and spend responsibly!

Founder and CEO of AxisWire, Founder and President of the luxury cannabis brand the House of Saka, Co-founder of Green Market Media & Industry Power Women. Cynthia is a contributing writer for Entrepreneur and Forbes. She sits on the Forbes Communications Council and holds a degree from the University of Pennsylvania and a certificate in journalism from Georgetown University.