The North American Marijuana Index increased 41% in November according to Dan Nicholls, Vice President of the Marijuana Index. This index performance was led by the Canadian stocks, which once again outpaced the U.S. stocks in this particular index. 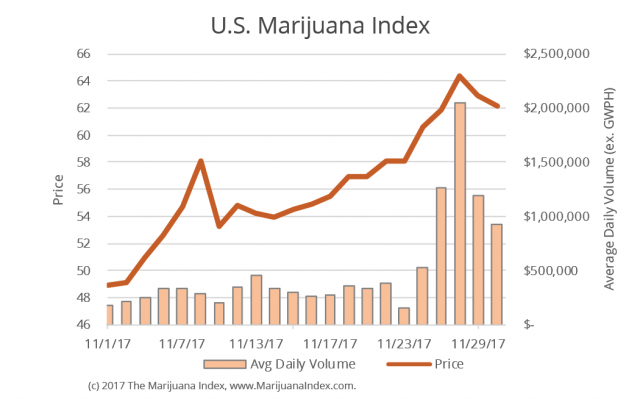 The upward momentum for the U.S. Index was being driven by expectations regarding California. The state is legalizing adult use marijuana as of January 1 and investors are anticipating huge sales figures. 15 out of 17 stocks in the group experienced gains for the month. Comparatively, the Dow Jones Industrial Average rose 3.8% for the month, while the Russell 200 rose by 2.8%.

The best performers in the U.S. Index included Golden Leaf Holdings (GLDFF) which rose by 15% for the month, MPX Bioceutical (MPXEF), which increased by 12% and MariMed (MRMD) which gained 10%.

The Canadian Marijuana Index was on fire as this group shot up 52%, marking this the single largest increase since the index was created. The Canadian index has risen 97% over the past three months. 15 of the 18 companies in the index saw values increase over 10%. Namaste Technologies increased by 360%, while Aurora Cannabis rose by 162%. The average volumes of all the stocks more than tripled in November over October. 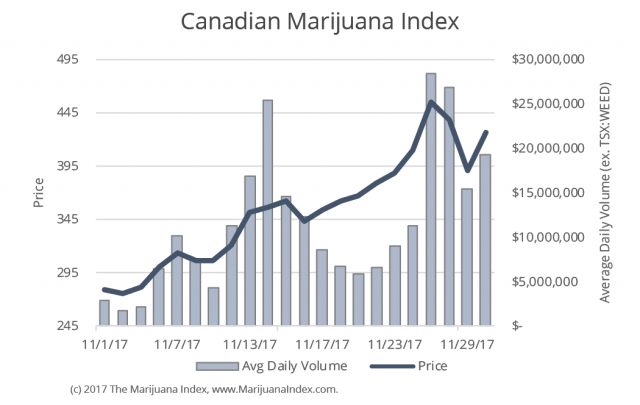 The overall stock universe, which is made up of 241 different names also rose by 34% in November. Nine out of 11 sectors posted gains for the month. The only sectors that fell were Real Estate and Ancillary. The sectors with the largest increases were Consumption Devices at 94% and Hemp Products at 75%.

Not everyone was a winner. Cannabis Wheaton Income Corp. (KWFLF) fell by 14% in November, while Innovative Industrial Properties (IIPR) dropped by 8%. Emblem Corp. (EMMBF) slipped by 2%.