January was a volatile month for cannabis stocks. U.S. stocks took a tumble in January following the killing of the Cole Memorandum by Attorney General Jeff Sessions. Yet, The North American Marijuana Index, a stock index that tracks the top performing cannabis stocks in the U.S. and Canada ended up with an increase of 18% in January.

Notable outperformers during the month included GrowGeneration Corp. (GRWG), Kush Bottles (KSHB), and MariMed Inc. (MRMD), all of which gained more than 50%.By comparison, the broader U.S. market also enjoyed a strong January, but not nearly as strong. The Dow Jones Industrial Average ending the month up 6% and the Russell 2000 closed up 3%.
` 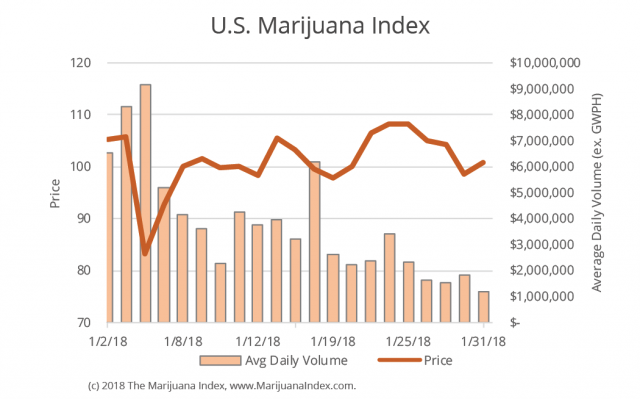 The Canadian markets continued to record impressive gains early in the month, as the Canadian
Marijuana Index jumped 49% in the first six trading days of 2018. However, this index also took a beating on January 4th following the move by Sessions. Still, the Canadian stocks finished out the month with a gain of 22%.

Sixteen out of the 24 companies on the Canadian Marijuana Index increased during January, with three stocks gaining more than 90% including Abcann Global Corporation (ABCCF), Newstrike Resources Ltd. (NWKRF), and THC Biomed Intl Ltd. (THCBF). Nine constituents gained more than 20% during the month. 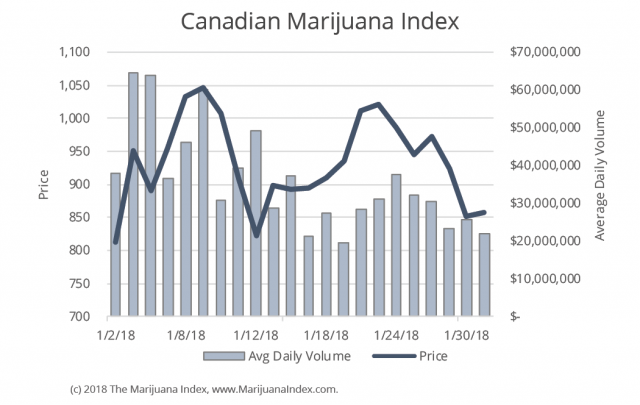 The top three losers included Solis Tek (SLTK), which fell 36% in the month, followed by CV Sciences Inc. which dropped 33% and MCIG Inc. (MCIG) which also tumbled 30% in January.

Dan Nichols, Vice President of the Marijuana Index said, “The Marijuana Stock Universe, which includes all U.S. and Canadian stocks with an involvement in the cannabis or hemp industry, saw an average increase of 8% in January.”