Colorado’s Cannabis Crushing It In Sales

The North American Marijuana Index, a stock index created by The Marijuana Index that tracks the top performing cannabis stocks in the U.S. and Canada, decreased 24% in February as the broader market also tumbled. The Russell 3000 and the S&P 500 both fell 3.7%. Even the MSCI REIT Index plunged 7.7%, making this the deepest monthly slide in over six years.

Following a strong start in 2018, the U.S. Marijuana Index spiraled down 23% in February. According to the Marijuana Index, all 15 stocks in the Index registered losses for the month and 13 companies lost more than 10%. Traders seemed to disappear as volumes fell a whopping 75% in February versus January. 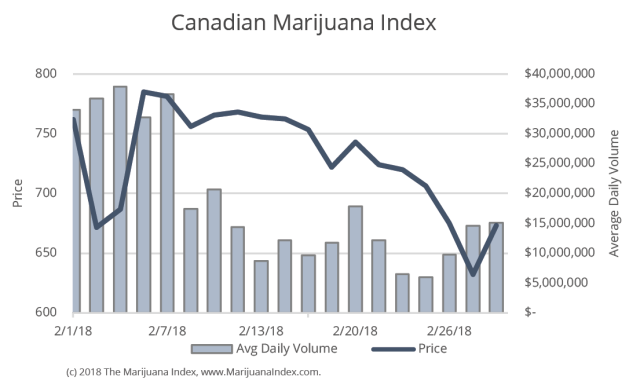 The Canadian stocks didn’t fare much better and that index had been on an impressive winning streak posting five consecutive months of gains. The Canadian Marijuana Index decreased 21% in February and most of those losses occurred in the first two days of the month. Cronos Group Inc. (TSX-V: MJN) and CanniMed Inc. (TSX:CMED) were the only companies to end the month in green territory. Cronos Group also made headlines by uplisting at the Nasdaq and moving from the International Exchange to the Global Exchange using the ticker CRON. So far, it is the first cannabis grower stock to be listed on a major U.S. exchange.