According to the state Department of Revenue data, Colorado’s cannabis dispensaries sold almost $192.2 million worth of marijuana products in May. the state reported $42.9 million in medical marijuana sales and $149.1 million adult-use cannabis sales. 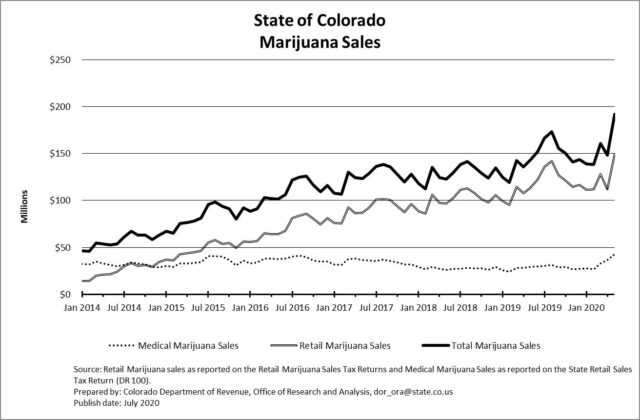 The slump for medical cannabis seemed to be over as the category staged a comeback in May setting a monthly record. Sales for medical marijuana had been bumping along at $26.6 million in February prior to COVID-19. Then the lockdowns began and the quarantine’s started causing lots of nervous anxiety for the population pushing sales to almost $43 million in May.

Marijuana sales for 2020 from January to May have already reached $779 million. At this rate, the state is sure to top last year’s sales of $1.7 billion. 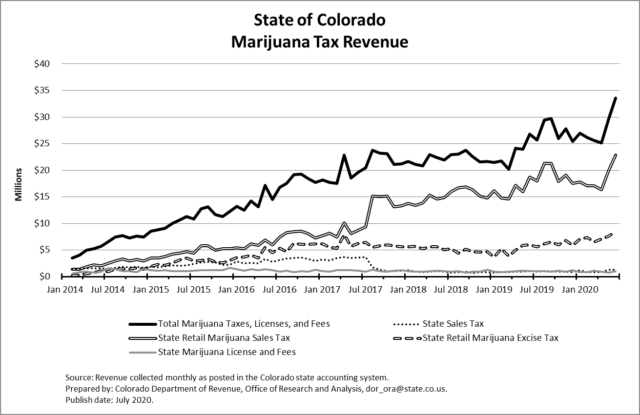 Colorado depends heavily on the tourist trade for the state’s income. Many of the ski resorts had ended their seasons early when the virus began. Now the crucial summer season is underway. The state has encouraged in-state travel this summer as a way to help boost its hospitality industry. The state is running ad campaigns saying that there would be no quarantine efforts against travelers.

While indoor bars are still closed, many cooped up tourists are ready to have some active outdoor fun. The state offers so much in the ways of outdoor sporting activities that can be done with social distancing that many are opting to head to Colorado for fun and to escape depressive pandemic locations. Plus, a trip to the dispensary can ease that anxiety and make for a much better vacation.