Editors Note: You can follow all current legislation for free under the Green Market Report Legislation tab.

On Wednesday this week, Congress will hold a hearing on banking services for the cannabis industry. This is the first hearing to be held by the new Congress that will begin tackling the issue of banking for cannabis companies.

Businesses that work in states where cannabis has been legalized continue to struggle with financial institutions. The major credit card companies of Mastercard and Visa refuse to work with cannabis companies since it is still a federally illegal product. The major banks in this country also decline to bank these companies even though some are publicly traded entities with market capitalizations in the billions. Cannabis companies have turned to local banks and credit unions for their banking needs. Payment options are a pieced together with various solutions, but they aren’t ideal.

Attorney Brady Cobb met with House lawmakers last week and is actively engaged with the legislative process. “With the opposition out of the way, we can finally make some progress,” said Cobb. He was referring to the ouster of Pete Sessions, who continually refused to bring cannabis legislation to the floor for a vote. Cobb said that the committee’s existing members were supportive and expect new members to be positive as well. The hearing will be available on CSPAN.

This comes on the heels of the creation of a new lobbying group called the National Cannabis Roundtable that is being chaired by former Speaker of the House John Boehner. The Speaker sits on the board of Acreage Holdings Inc. (ACRG.U). That group is also working towards getting laws changed to favor more traditional banking.

Marijuana Moment reported that the people scheduled to testify include Corey Barnette, owner of the District Growers Cultivation Center and Metropolitan Wellness Center, which produce and sell medical cannabis in D.C., California State Treasurer Fiona Ma, Rachel Pross, the chief risk officer at the Oregon-based Maps Credit Union and Greg Deckard of State Bank Northwest in Washington State representing The Independent Community Bankers of America. In addition to that, Major Neill Franklin, a retired Maryland police officer who serves as the executive director of Law Enforcement Action Partnership (LEAP) looks to be on board.

While it would be great news for cannabis companies and dispensary owners to finalize use a major bank or take a debit card for a transaction, it could spell trouble for others. A whole cottage industry has sprung up in order to solve the banking problems for cannabis companies. It’s possible that by opening up the system, these companies stand a chance of getting acquired by bigger banks who want to get a quick foot in the door. 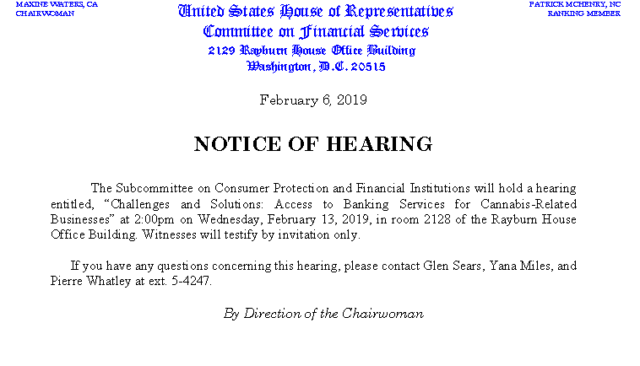