The differences between Baby Boomers (i.e. those born during a marked rise in birth rate, thought to be 1946-1964) and Millennials (born 1981-1996 or thereabouts) vary from the subtle to the stark. With the common friction points of politics, economics, and culture escalating to bare-knuckled debates over human rights and life-or-death public safety issues, polarization is increasing both within and between these generations.

Marijuana dispensary chain Verilife, (a subsidiary of PharmaCann, one of the county’s largest vertically integrated cannabis companies) recently conducted a study to map just one small piece of the Boomer/Millennial divide— the difference in marijuana consumer habits between the two.

The results of the study (which surveyed 1,000 Millennials and 1,000 Baby Boomers regular marijuana consumers) reflect not only some predictable differences (yes, Boomers are twice as likely to use marijuana in the morning), but commonalities as well, some of which have emerged during the Covid-19 pandemic. Notably, both generations report using marijuana significantly more during the Covid crisis (44% more for Boomers and 36% more for Millennials).

The biggest difference in consumption occurs around motivation for use, with nearly half of Millennials using for recreational reasons, while Baby Boomers are twice as likely to use marijuana solely for medical purposes. This despite a discrepancy that shows that more Millennials than Boomers believe that cannabis has medical benefits. A correlation might be drawn between Boomers’ higher rate of use for medical issues and the gravity of the illnesses for which they most commonly consume: arthritis, chronic pain, and cancer.

For Millennials, the top three medical reasons are migraines, chronic pain, and managing nausea. Whether the use is medical or recreational, one in five Millennials consider themselves daily users as opposed to only 12% of Baby Boomers.

A review of the report reveals some solid differences but a preponderance of similarities as well, including inhalation as the most preferable way to consume marijuana and the fact that both generations cite relaxation, social use, and anxiety as their three top reasons for recreational use, albeit in different orders of importance. Millennials are twice as likely to use before going to a public gathering or large event to ease social anxiety– a complaint far less frequent among members of the older generation. There is only a $3 difference in monthly spending between Boomers ($75) and Millennials ($78), and only a 2% difference between the Boomers (26%) and Millennials (28%) who said they have consumed marijuana before work. The divide grows a bit larger as far as toking up with the boss is concerned, with Boomers edging out Millennials with a 16% lead.

No doubt these numbers will prove useful to advertisers when crafting their marketing strategies to lure specific demographics to their client brands, but the study also points to the possibility that marijuana may be one tract of common ground upon which Boomers and Millennials can meet without rancor, or at least quite so many scathing memes. 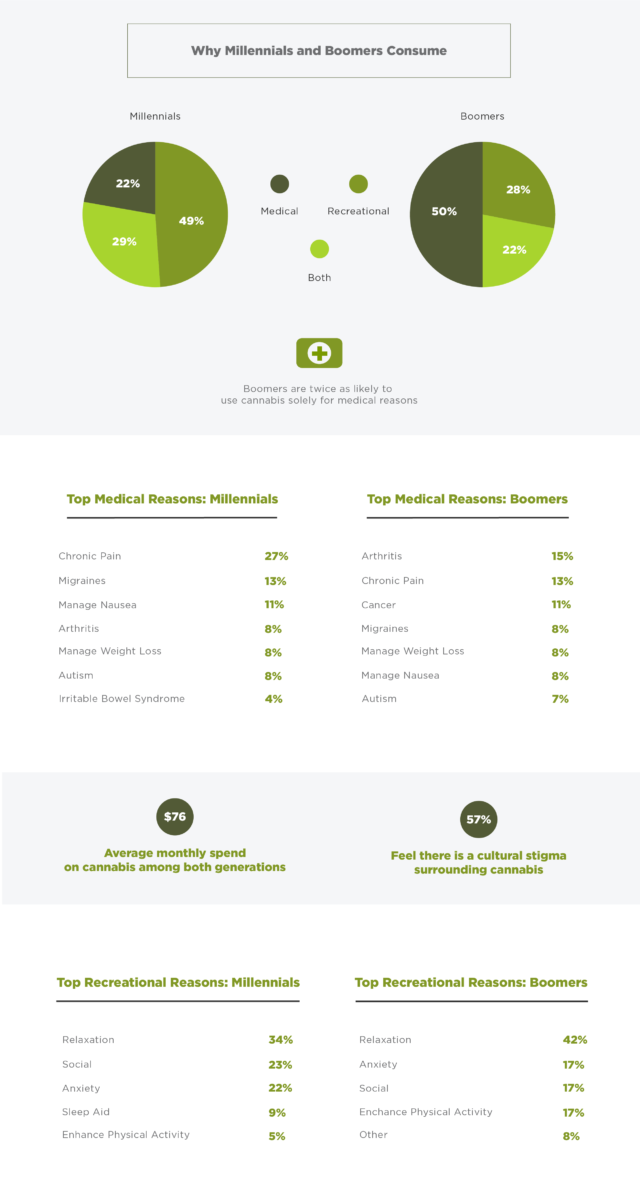 Julie Aitcheson is a freelance writer who has had articles published in Echo Quarterly, Communities Magazine (formerly Talking Leaves Magazine), Isabella, and All Things Girl. She received a full fellowship to the 2013 Stowe StoryLabs and won second place in the 2014 San Miguel Writers’ Conference nonfiction writing competition. She has published two young adult novels and is currently at work on her next book.

We are honored to receive an Honorable Mention for the 2020 Eddie Awards for Investigative Journalism from… https://t.co/ak7bqBaV87

RT @hempcrateco: Cool article we were featured in 😎. Thanks @GreenMarketRpt 🙌