Top 10 Most Influential Communication Professionals To Watch In Cannabis 2020

It’s International Women’s Day and there are probably some women celebrating with cannabis, but you wouldn’t know that because many women are hesitant to discuss it. Cannabis consumption among women is on the rise, yet there are several reasons why women continue to stay away from it.

Van der Pop, a Seattle-based publication that focuses on female cannabis consumers recently conducted a survey to better understand the female cannabis consumer. April Pride, the Van der Pop founder said that cannabis is still stigmatized. Her survey found that 70% of women believe cannabis consumption carries a stigma and 66% hide their usage. The study was done in conjunction with CVI and it surveyed 1,530 women across North America. It focused on women who had consumed cannabis or were interested in trying cannabis but hadn’t consumed it yet. The age range was over the age of 19 in Canada and 21 in the United States.

Fear of judgment was the driving factor behind hiding usage. Women said that they were worried that others would question their decision making and possibly label them a “stoner.” Pride said, mothers especially worry about what others will think. “They worry their kids will find it at some point,” she said. “Maybe parents won’t let kids over for a playdate.“ Pride also thinks that the state a woman lives in also determines how people will react. “Living in a state like Washington, it may be no big deal, but if a woman lives in a state like Alabama, it could definitely be a problem,” she said.

The Van der Pop survey found that women mostly look at cannabis for medicinal use and not recreational. This surprised Pride, but then she thinks that many women categorize stress and anxiety as a medical condition and not an adult-use condition. “I was surprised sleep wasn’t in the top four,” said Pride.

One unique response from the survey was that Van der Pop learned that one in 10 women were using cannabis for their sex life. “It was a way higher number than I thought it would be,” she said. “It’s the two topics women are very reserved about, sex and cannabis.” 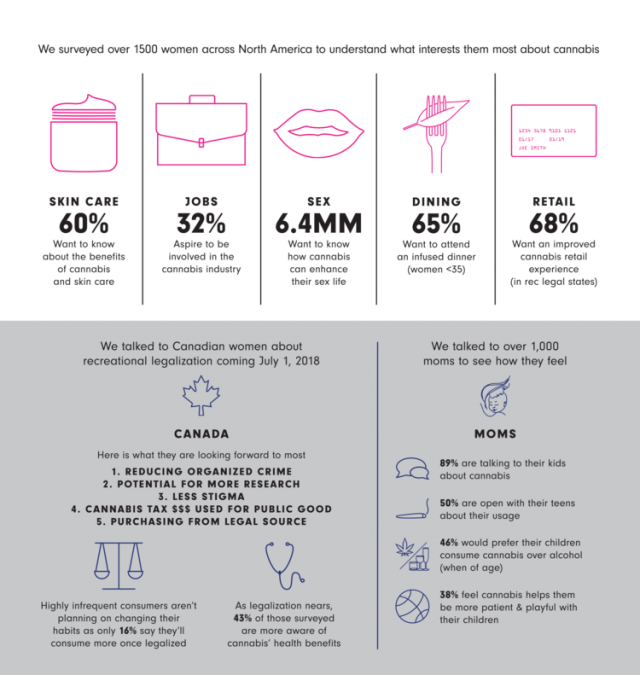 ‘Psychedelic Renaissance’ Momentum Underscored by Sold Out Conference on ⁦@cheddar⁩ thanks ⁦@chlobo_ilo⁩ for coming… https://t.co/Pr0fk3bhxn