What are your plans for 4/20? If you’re like the majority of cannabis users, that answer lies somewhere between a giant joint and a bag of chips. But if you live in a state where cannabis isn’t legal, or you’d just rather have a drink instead, there’s still a way for you to celebrate the holiday: hemp and cannabis inspired beer.

Hemp beer and cannabis inspired beer is exactly what it sounds like; beer that has been brewed with parts of the hemp plant or beer that’s been infused with cannabidiol (CBD).

Although you won’t find any beers infused with THC due largely to government regulations, you will still find plenty of beers that have both aroma and flavor of cannabis. Here are some hemp and cannabis inspired beers to help make your 4/20 the highlight of the year.

While some beers shy away from the fact that their beer is brewed with hemp, preferring instead to play up its connection to cannabis, The Hemperor HPA dives head first into its hempen identity. The HPA in its name stands for Hemp Pale Ale, a clever designation coined by the brewers behind The Hemperor, New Belgium. With a 7% ABV(alcohol by volume), the beer pours clear and golden and has a heavy cannabis aroma that will make you think you just lit up a joint. Brewed with hemp hearts, The Hemperor has a medium body with a hop-heavy earthy flavor. 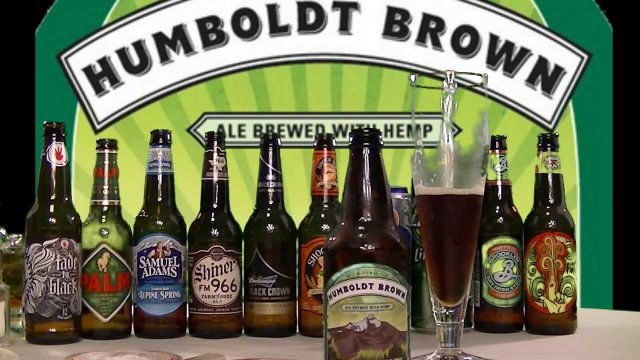 Brewed with toasted hemp seeds, Humboldt Brown Hemp Ale is a medium bodied brown ale that goes great with a burger. Brewed by the Humboldt Brewing Company, the beer pours with nice dark brown color and has an ABV of 5.7% . It has an aroma of roasted nuts, dark malts, and just a hint of caramel. There is a slight dry sweetness to it with just a bit of bitterness to balance everything out and give you that warm herbal flavor that you’ve come to expect from cannabis.

This Indian Pale Ale is brewed by the Sweetwater Brewing Company, best known for its cannabis inspired (but certainly not infused) Sweetwater 420 Extra Pale Ale. Like many of its brewed brethren, the Hop Has Easy IPA is loaded with hops. Adding to its pungent and floral aroma is the inclusion of Amarillo Hop Hash, which gives it a somewhat gooey, resinous feel and a crisp tropical citrus fruit flavor. The ABV on this hempen brew is 4.2% and pours with an opaque golden color.

Unlike most hemp and cannabis inspired beers that simply brew with hemp, Two Flowers IPA actually infuses CBD directly into the beer. Each 12 oz. bottle of Two Flowers IPA contains an ABV of 6% and approximately 3mg of CBD in it. Brewed by Coalition Brewing Company, this west coast style IPA pours a soft and hazy gold color, has a hoppy aroma and crisp tropical fruit flavor with a grassy bitterness that helps balance out the sweetness.

If you noticed an influx of hemp and cannabis inspired beers, you’re not the only one. In the wake of the rapid rise of legalized cannabis, more and more breweries have begun crafting beers with the cannabis user in mind; a trend that Phil Boyle, the General Manager of Coalition Brewing, sees continuing for the foreseeable future.

“We are seeing a movement towards Cannabis inspired beers from CBD, Hemp to Terpene enhanced beers,” said Boyle. “The more breweries we see moving towards this trend and I believe it will be a new beer genre/style, the validation, education and normalization of such beers will increase. Although there are a number a regulatory hurdles in most cases breweries will continue to push forward.”

Do you love wine? Do you love cannabis? Then check out Green Market Report’s rundown of cannabis-infused wine!

previousTurning 420 From A Stoner Celebration To One Of Wellness