Why Is the CBD Market Exploding?

Higher Ground media and Seattle-based cannabis company Saints Joints have created The Ballot Box, a high-end box of cannabis joints designed to smash stoner stereotypes by registering people to vote. In addition to five premium pre-rolls, the Ballot Box contains a QR code that immediately registers voters, a mini version of the Bill of Rights, and non-partisan information about voting and elections.

“The cliche, obviously, is that pot smokers are lazy and couch-locked, when – in fact – we’re as active and involved as any community,” notes Higher Ground Editor-in-Chief Michael A. Stusser. “With the Ballot Box, we’re using a new platform as an entry point to spark engagement, and register new voters.” 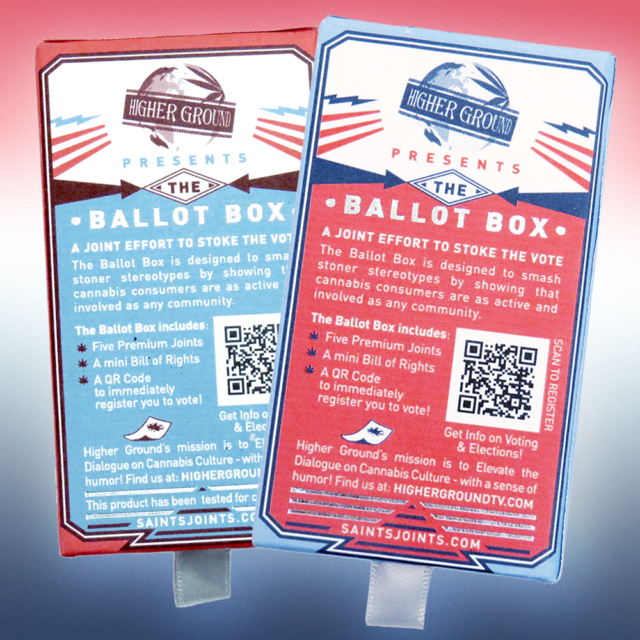 The Saints Joints/Higher Ground Ballot Boxes was launched on July 4th and will be available in California, Washington, and Oklahoma. The QR code directs consumers to the Cannabis Voter Project – and immediately registers individuals to vote. The nonprofit and non-partisan Cannabis Voter Project is focused on educating, registering, and turning out voters. HeadCount has registered half a million voters since 2004 at concerts and events.

Higher Ground TV is an online cannabis media company not unlike The Daily Show. It has been using comedy driven videos and parodies to elevate the dialogue on cannabis culture, including Comedians in Cars Smoking Cannabis, and Profiles in Legal Cannabis.

Saints Joints is known for its hard-cased luxury boxes highlighted by artists such as the Bay Area’s Jeremy Fish in their Artist’s Series packs, a Tattoo Art Series featuring Jimbo Phillips, and a Limited Edition Pride Pack with proceeds benefiting Equal Rights organizations. Each specialty box is a limited edition similar to album covers and creating a rock n’roll collect-‘em-all incentive.

“We see ourselves as leaders not only in the arena of legal cannabis but as members of the mainstream community,” said Lawrence Perrigo, founder of Saints. “The collaboration with Higher Ground is our latest joint effort to raise awareness, and show how cannabis brands – and consumers – are doing more than getting high. We’re also highly engaged in the democratic process.”

“We thought it was important to include the Bill of Rights in our Ballot Box,” said Stusser, “because these individual rights weren’t originally included in the Constitution. Like the legalization of marijuana, the people had to push the government to allow it.” The Bill of Rights, of course, includes the first 10 amendments in the Constitution, including freedom of speech, religion and the press, the right to assemble, States rights, and due process.

“These amendments – like cannabis – were controversial at first,” notes Saint’s Perrigo. “Today, over 70% of the population supports legalization – but we have a long way to go at the national level. So adding the Bill of Rights is a nod to weed smokers that our democracy is still evolving – and we need to be involved to make lasting change.”