iAnthus Capital Holdings (ITHUF) said on Monday it received a $50 million investment from private equity firm Gotham Green Partners to help it pay down debt and expand in key areas such as Florida and New York.

iAnthus, which is traded on both the Canadian Stock Exchange and over-the-counter in the U.S., said it will receive $46 million in cash from the investment once fees are paid. $20 million of that will go towards the repayment of a one-year note with interest to VCP Bridge. The rest will be used for the “continued cultivation and dispensary build-outs in New York and Florida markets” and general corporate purchases. After the note is paid, iAnthus said it will have $32 million in cash left on hand.

“Gotham Green Partners is well recognized as a long-term investor and leader within the cannabis investment community, and we are excited to partner with GGP to create value for our shareholders,” said Hadley Ford, CEO of iAnthus in a statement. “As the U.S. cannabis industry continues to grow, we will be well-capitalized and well-positioned to continue the buildout of our existing assets and pursue opportunistic acquisitions to expand our footprint.” 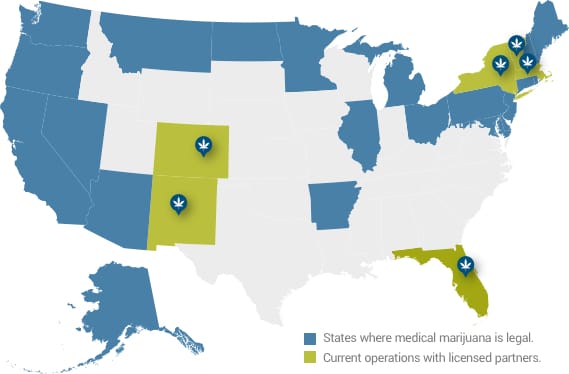 Gotham said iAnthus’ “compelling structure” (it operates in several U.S. states), was part of the reason it invested in the company.

On iAnthus’ website, the company says it owns and operates licensed cultivators, processors, and dispensaries across the U.S., a model which it believes “provides a unique combination of capital and hands-on operating and management expertise to create unparalleled value for its shareholders.” The company has one of only two licenses for Brooklyn, NY.

The management team of iAnthus said the investment is believed to be the largest investment ever made by one investor in a U.S. publicly traded marijuana company.

“GGP’s investment enables iAnthus to recapitalize its balance sheet with long-term exchangeable debt and significantly fund its key operations, particularly in New York and Florida,” Kalcevich added in the statement. “We look forward to GGP’s involvement in these activities in the coming quarters.”

The investment is considerably expensive for iAnthus, as it has issued $40 million worth of high-yield three-year notes, which have a 13 percent coupon. The notes are convertible to iAnthus’ stock at $3.08 per share and also include a warrant to purchase 6.67 million shares of iAnthum at $3.60 per share.

In addition to the secured debt issued by iAnthus, it has also issued $10 million worth of units, with each unit comprised of one common share worth $2.57 and a warrant to purchase the stock at $3.86 per share.

U.S.-listed over-the-counter shares closed on Monday at $3.69, the highest level seen since mid-January.

next4 Of The Hottest Cannabis IPOs To Watch For In 2018