New data released by Flowhub finds the price of an eighth of cannabis in U.S. cities can vary by as much as 15 percent after taxes have been applied. Now that cannabis is being regulated by cities and states with complicated tax codes, consumers can pay 20 to 40 percent tax on their purchases.

The cities included in the data were Boston, Denver, Las Vegas, Los Angeles, Portland, San Diego, San Francisco and Seattle—the top eight major urban cannabis markets. In order to determine which city had the highest priced eighth of an ounce of flower, Flowhub started by assuming the price of each eight was $35 and then added on the taxes associated with that location. Prices do not reflect the actual cost of an eighth in those cities.

Most expensive was Seattle, with a cost of $51.49. Seattle was first place in price on the list because it also has the highest tax rate at 37 percent.

Second place Los Angeles came in at $48.48. The 35 percent taxes include excise, sales, and business-REC taxes. Taxes in California are calculated against the subtotal and applied taxes. For example, in San Francisco, the state sales tax is 8.5 percent of the subtotal plus the excise tax.

Interestingly, prices in the three California cities differ by quite a bit. Eighths in San Diego and San Francisco cost $45.54 and $43.67, respectively. That’s almost $5.00 less than the price in Los Angeles. San Diego taxes at 27.75 percent and San Francisco, 23.5 percent—a big difference from LA’s 35 percent.

Denver places the largest number of taxes on cannabis of any of the cities on the list. The 26.15 percent taxes include a state cannabis retail tax, state and municipal sales taxes, a Denver retail marijuana tax, an RTD tax, and a cultural tax. Still, with all these taxes, Denver was 5th in price, at $43.14.

Eighths in Boston and Portland are taxed at 20 percent and both have a cost of $42.00. Boston places excise, state sales and local municipal business taxes on cannabis, while Portland has two taxes: OLCC state and Portland city.

Las Vegas came in the lowest priced at $41.39. Taxes there run 18.25 percent and consist of a state recreational cannabis tax and sales tax.

Smaller dispensaries and entrepreneurs are fearful that high taxes will force them out of the market, so Flowhub has some advice for them. It includes understanding local laws, keeping detailed records, setting an order of operations for tax calculations and being upfront with consumers. They also suggest fighting for fairness by lobbying lawmakers for responsible regulations in the cannabis market. 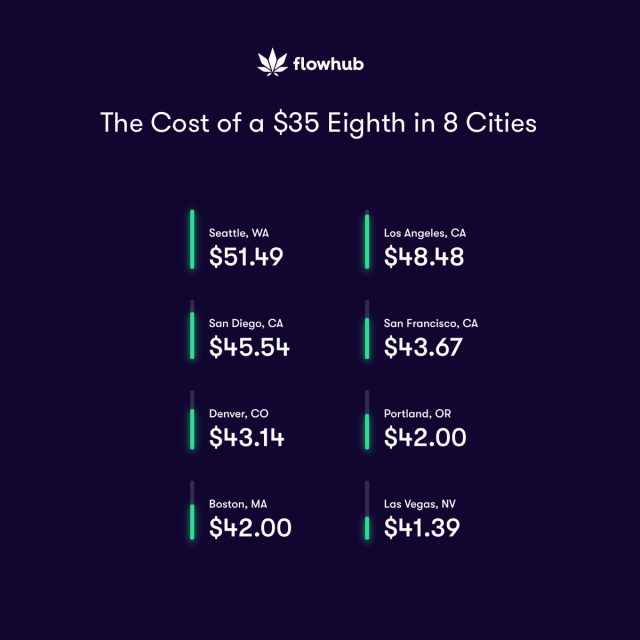 Peggi Clough is a freelance writer and editor whose clients have included Hallmark Cards, Cerner Corporation and Village Voice Media. Prior to freelancing, she was an editor for National Seminars Training. Peggi is committed to fighting for the legalization of medical cannabis in her home state of Missouri.