The legalization of recreational and medicinal marijuana has skyrocketed its production.  The multibillion-dollar industry averages 22 million pounds of marijuana annually and is expected to increase in the coming years. With the increase in marijuana production, it is inevitable that restrictions and government regulations will tighten.

Matrix NV,  along with many other marijuana producers, has faced challenges when it comes to marijuana disposal laws. The most recent laws require marijuana plant waste to be rendered unusable by grinding and incorporating it with other ground materials.  This mixture must be at least 50 percent non-marijuana waste by volume. Failure to meet marijuana waste disposal requirements can lead to monetary fines up to $15,000 and/or the cancellation of the business’s marijuana license.

For Matrix NV to achieve the 50 percent ground waste mixture, the company was drying the marijuana waste, cutting strips of cardboard and mixing the cardboard and marijuana waste into a woodchipper. This was the best option for Matrix NV, LLC at the time, but it was not the most efficient. Routine maintenance was performed, on multiple instances, on the woodchipper, which was not meant to shred rope-like material, rocks and sticks. As a result, it was constantly clogging.

Frye said, “It’s difficult to get rid of all of this waste with a woodchipper and it was really starting to build up.  We started exploring options to get rid of the harvest waste while staying in compliance with the state-specific regulations. We started to look at machines that were geared more toward industrial waste and nothing seemed to be the right fit.” 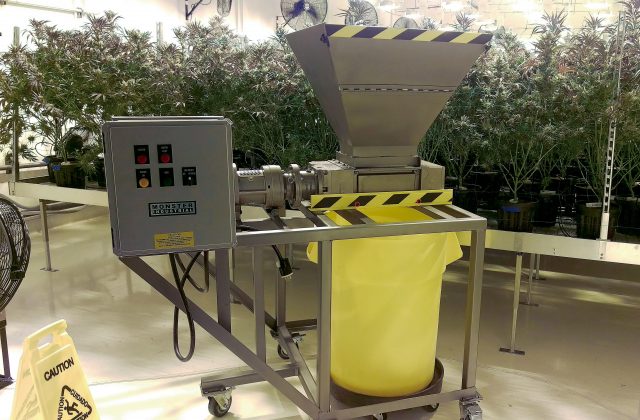 That is when Frye found JWC Environmental, a company that manufactures grinders specifically for marijuana waste destruction.  The part that excited Frye the most was this grinder could function in wet or dry applications, meaning Matrix NV, LLC wouldn’t need to dry the waste before grinding.  The shredders would grind compostables and non-compostables without interrupts including entire plants, root balls, soil, plastic pots and other debris. The grinder would save labor and energy costs and would grind down marijuana waste and non-marijuana waste.

The 3-SHRED-H-1200 was a better alternative to wood chippers due to the grinders operations. The new grinder was quiet due to its powerful electric motors, could be used inside or outside as it transmits zero exhaust fumes, and it shreds the toughest dry or wet waste more efficiently. The shredders are more powerful than a wood chipper, which makes marijuana waste disposal completely hassle-free.

The grinder worked with Matrix NV’s budget and reduced the one- to two-day process to a three- to four-hour process, a 75% labor reduction for waste disposal.  The grinder now shreds the wet or dry waste and operates without interruptions.

No matter what you mix the marijuana with, to make it unusable – soil, plastic pots, netting, food waste – JWC Environmental’s 3-SHRED can handle it.

Frye says, “We previously couldn’t process the waste like we can now – it is efficient, clean and hassle-free.”