Vermont Takes Another Step Towards Legalization Of Recreational Marijuana

It’s the first marijuana unicorn in the country. California based MedMen recently received a $30 million investment from Captor Capital for 3% of the company placing the valuation of the currently private cannabis company at a billion dollars.

Chief Executive Officer Adam Bierman said MedMen is expecting an additional private investment in February that will make the valuation even higher. Following that, MedMen is planning on a reverse merger that will place shares on the Canadian Stock Exchange with the proposed symbol of MMEN. The estimated open of the publicly traded shares is expected sometime in the second quarter. “I used to say we were the biggest pot company in America and that was aspirational, now it’s actually true,” said Bierman. He went on to add, “It was a real heavy lift to get all the signoffs and go through all the governance we had to go through to do the roll-up.”

MedMen did not become a unicorn overnight. It was founded by company President Andrew Modlin and Bierman back in 2010 as a dispensary owner and consulting business. Then the company pivoted towards investments raising capital with the intent to put investors money to work towards various cannabis projects. In October 2017, MedMen announced it was planning on raising $250 million for the Opportunity II fund which would have made it the largest marijuana investment fund to date. Those plans were scrapped and MedMen pivoted again with the decision to go public. 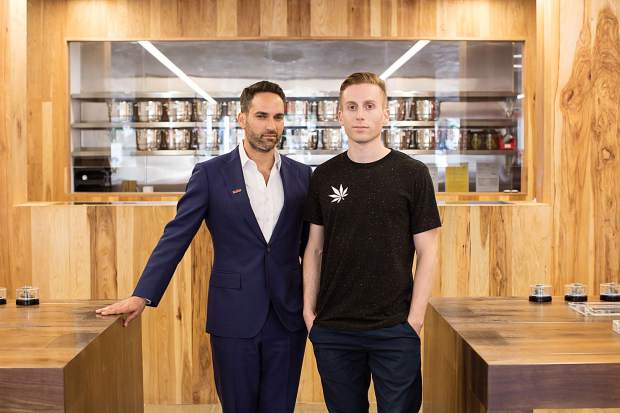 “The second fund was doing better than the first fund,” said Bierman, “But it was going to take a year and a half to raise that $250 million. At the same time, a billion has been raised in the Canadian market.” Bierman said he had already been in discussions with various groups in Canada over the past couple of years and the timing finally felt right.

“It all lined up. The money being raised in Canada, California’s legal market and the number of people looking for a California play,” he said. Now when people invest with MedMen they are investing in the expansion of the brand, not outside investments.

MedMen believes it will be successful because it remains hyper-focused on just three markets. California, Nevada and New York. “We only compete in constrained markets where there is a high barrier to entry,” he said. He noted that Los Angeles will be trimming its 1,500 illegal dispensaries to approximately 200 licensed operators. “Even if it swells back to 500, it is still cutting down on the total,” he added.

Bierman also acquired licenses in New York for medical marijuana and has leased space on Fifth Avenue for a dispensary planned sometime in the future. In Nevada, three locations are planned, with one of those on the strip in Las Vegas. The Nevada market is already experiencing a heavy tourist trade and California is expected to see the same. New York is a heavily restricted medical market, but many in the industry are planting flags now for what they believe will inevitably become a recreational market. If that were to happen, New York is also expected to do a heavy tourist trade.

MedMen’s choice to stay focused on these three markets leads Bierman to believe it won’t suffer from the typical retail margin squeeze seen in other markets. In Washington, Oregon and Colorado dispensaries have faced market saturation causing falling margins and stiff competition. “For us, it doesn’t apply. The margins will only get better,” said Bierman.

MedMen currently has six locations open in California with a seventh planned. Three are in the process of being established in Las Vegas and should be on board this year. New York has three dispensaries operating in upstate with one planned for Manhattan, but no firm opening date. That puts MedMen at potentially owning 14 locations as of now.

By comparison, Native Roots in Colorado has 21 stores with 59 licenses in the Denver area. LivWell Enlightened Health has 14 locations open in Colorado and holds 43 licenses, plus it operates a dispensary in Oregon for a total of 15.