Up and coming Michigan cannabis company Gage Cannabis has announced a partnership with Slang Worldwide Inc. (OTC:SLGWF) to produce and distribute Slang products. While Slang is the better-known company, Gage has been quietly building a solid business in Michigan.

Gage is focused on becoming a leader in the state as the cannabis industry has switched from building huge national footprints to targeting specific states. Adult-use cannabis sales in Michigan began in late 2019 and have been growing steadily since then with 27% month-over-month growth from March to April 2020, based on data from the Michigan Marijuana Regulatory Agency. A recent study by Michigan State University estimates that total cannabis sales in the state could reach $3 billion within the next five years. It is currently the fourth largest market in the country. 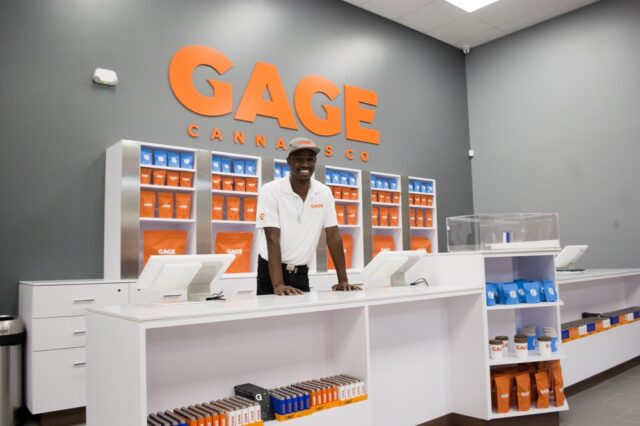 Gage has licenses for 13 dispensaries of which four are operational at this time. There are four licenses for cultivation with three operational and one processing license. The average basket size for Gage in March was $130 and that number has jumped to $175 in April.

For now, Gage is privately owned with 60% of the company held by management and insiders. The company has raised $60 million and has $7 million in cash and no debt. Bruce Linton is the Executive Chairman, while Fabian Monaco is the President.

“Gage understands that partnering with industry-leading brands like SLANG elevates the Michigan cannabis market and provides consumers with a range of products that are of exceptional quality,” said a representative of Gage. “Gage is unwavering in its commitment to bringing only the best cannabis products and brands to Michigan.”

The company made a big splash with its Cookies partnership when it opened a Cookies branded dispensary on the well known 8 Mile road in Detroit. The 3,500 square-foot Cookies store employs 40 Detroiters and the company has in place a social equity program through which it will share $950,000 with social equity participants in cities disproportionately impacted by marijuana prohibition.

The partnership means that Gage will be including its category-leading products O.penVAPE, Pressies, District Edibles, and Bakked in its dispensaries. SLANG will also provide sales consulting services and will receive royalty payments for each branded product sold in the state.

“Partners are the backbone of the SLANG network, and we are excited to embark on this initiative with a great operator like Gage,” said Peter Miller, CEO of SLANG Worldwide.  “Gage has demonstrated an ability to scale as leaders in a rapidly growing and competitive market. By supporting their business with the diversified SLANG product offerings, we expect an even greater mutual scale and success. This deal is directly on target with our licensing and partnership strategy, and we look forward to growing together.”

The addition of the SLANG brands will strengthen Gage’s offering in the vape, edible, and concentrate product categories. Production of the additional products will utilize Gage’s increasing cultivation and processing capacity in the state.

“I am very excited to see this collaboration between two companies that are each innovators and leaders in their own segment of the cannabis market,” said Bruce Linton, Executive Chairman of Gage and an investor in SLANG. “Partnerships like this are a great way for both companies to accelerate their growth in a capital-efficient manner, which is crucial in today’s market.”