Though marijuana remains illegal in New Mexico for recreational use, the growth seen for medicinal purposes has surged in 2018, surpassing $50 million in sales, due in large part to a huge rise in patient enrollments.
According to data compiled by the New Mexico Department of Health (NMDOH), the 35 commercial cannabis producers in the state reported $51 million in sales in the first six months of the year. That marks a 27 percent increase year-over-year.
That jump in sales of which five providers accounted for 78 percent of the increase, was due in large part to patient enrollment in the Medical Cannabis Program, which had 54,857 active cardholders as of June 30th, an increase of 24 percent year over year.
“Providing patients with affordable, safe, and accessible medicine has been the intention of legislators since the inception of the program,” said Duke Rodriguez, CEO and President of Ultra Health in a statement. “Moving forward, success will be defined by the quality of life of the physical, mental and social well-being of each patient rather than merely the number of patients served.” 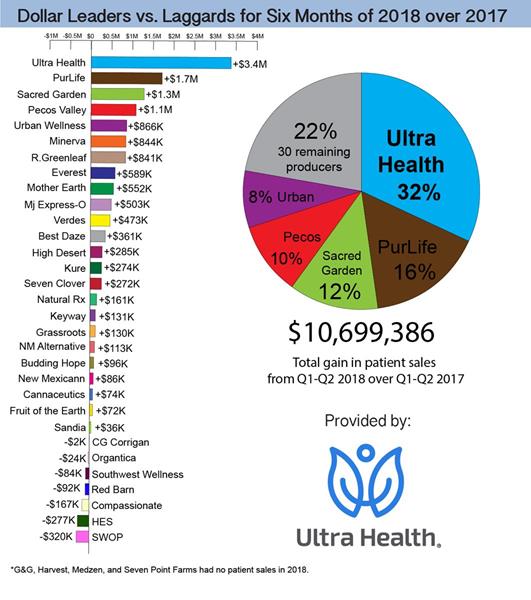 Ultra is one of the key producers in the state, with patient sales ahead of the other licensed providers for a third consecutive year. It generated $7.7 million in sales in the state, up nearly 80 percent year-over-year, while PurLife also reported strong figured. Combined, the two accounted for 48 percent of new business in the first half of 2018.
In the first half of 2018, patients bought 7,557 pounds of marijuana, up 12 percent over the same time frame in 2017.
The growth throughout the state is widespread, with several counties experiencing significant jumps in enrollment. Counties such as Grant, Otero, Curry, Sante Fe and Dona Aña all experienced 20 percent or more growth in cardholder figures. Grant topped the charts with 42 percent growth.
The growth throughout the state is a good sign for producers, but it’s also a sign that demand is outpacing supply. The state’s licensed producers “are unable to totally meet New Mexico patients’ demand for safe and legal cannabis,” so it may be forcing them to seek their cannabis elsewhere, such as the “unregulated illicit market,” the statement added.
There’s also the concern that wholesale transactions are becoming a burden for the cannabis industry. The Lynn & Erin Compassionate Use Act gave licensed producers the exclusive authority “to produce, possess, distribute and dispense cannabis,” but there is no mention of any limit on the aforementioned activities.
In 2013, NMDOH announced a maximum cap of 450 plants allowed per producer, but in August 2016, Ultra sued the NMDOH, saying that the cap needs to be adjusted higher.