The cannabis industry may have lots of acres of marijuana plants, but polished chief executive officer’s seem to be in short supply. Two different cannabis investor groups confessed that they get excited when they come across a “good” CEO, because too often the emerging cannabis companies are lead by founders that are unable to either take the business to the next higher level or behave in a manner that isn’t appropriate for a company leader.

Take for example, a recent exchange on Facebook  with the CEO of EvoLabs  Alex Cahoj. A woman associated with cannabis smokers made a statement that abortion was normal and not shameful. She linked to a story about female athletes having terminated pregnancies. Cahoj suggested the woman “Just don’t be a whore. It’s not that complicated.”  A comment that was incredibly inappropriate regardless of one’s position on a woman’s choice to terminate a pregnancy. It also begged the question, why would a male CEO of a vape pen company feel the need to weigh in abortion rights and call out a woman in such a public forum and using that language? 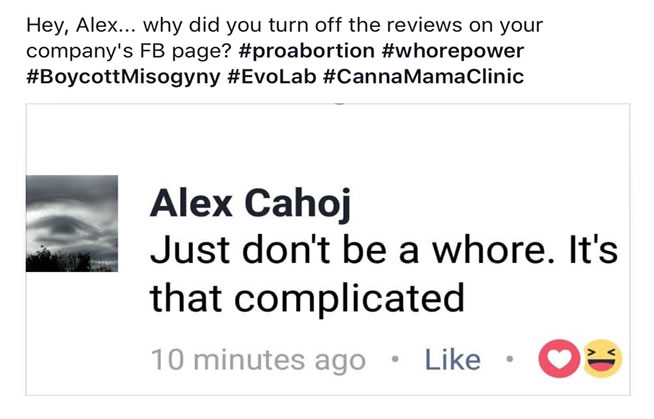 Cannabis insiders say they watched the exchange in real time and were shocked to see it. The comments have since been deleted.

Then there’s Mike Straumietis, chief executive officer of privately-held Advanced Nutrients and known also as Big Mike. His widely followed Instagram feed frequently features scantily clad women in tiny lingerie. His company is touted as the number one nutrient brand and has been reported to have sales anywhere from $65 million a year to $90 million. The products can  be bought through Amazon and Wal-Mart. It’s his company and he has every right to portray himself as the marijuana playboy. However, the cannabis industry has shown itself to be very welcoming to female executives and many have no interest in seeing women’s butts in tiny panties on a CEO’s public Instagram feed.

One of the recurring themes from insiders that preferred not to go on the record, were that many cannabis company founders got their start in an alternative industry with a federally illegal product. This was the catch-22. Experience in the industry meant you were a law breaker. It also meant that maybe that these types of executives (not necessarily the previous examples) either weren’t able to follow traditional career paths for various reasons or had no desire to enter the buttoned up corporate world.

Some company founders have managed to learn and grow with their companies. Others have been shifted to other positions while more seasoned executives from outside industries have come in to take over.

Of course, the cannabis industry isn’t alone in this challenge. Witness Silicon Valley’s bro executive problem. Tech companies may have the more polished CEO’s, but they can’t seem to recover from the bro mentality like Uber’s Travis Kalanick who recently had to step down as his lack of polish became evident.

“The characteristics of a good CEO of a cannabis company resemble that of a good CEO of any other company – intelligence, diligence, leadership, vision, and stability,” said Bryan Meltzer, Partner at Feuerstein Kulick. “As more and more professional CEO’s continue to enter the space, legal cannabis companies, as well as the overall industry, should benefit from the knowledge and best practices utilized in other industries.”

As the founders of the cannabis industry either find that they don’t have the skill set to grow with their companies or resist the push to be more “corporate”, executives from other industries looking for a challenge are happy to step in. Eager for the opportunity to get in on the ground floor of an emerging industry.

Krista Whitley, CEO and Founder at Social Media Unicorn said, “One of the greatest opportunities for the cannabis industry is for talent from other industries to bring their expertise to our vertical. For both of my cannabis organizations I have actually never put out a ‘Now Hiring’ sign. We aren’t ‘now hiring’. We are always hiring great candidates, so I have a pool of people who want to join our team any time expansion is required.”