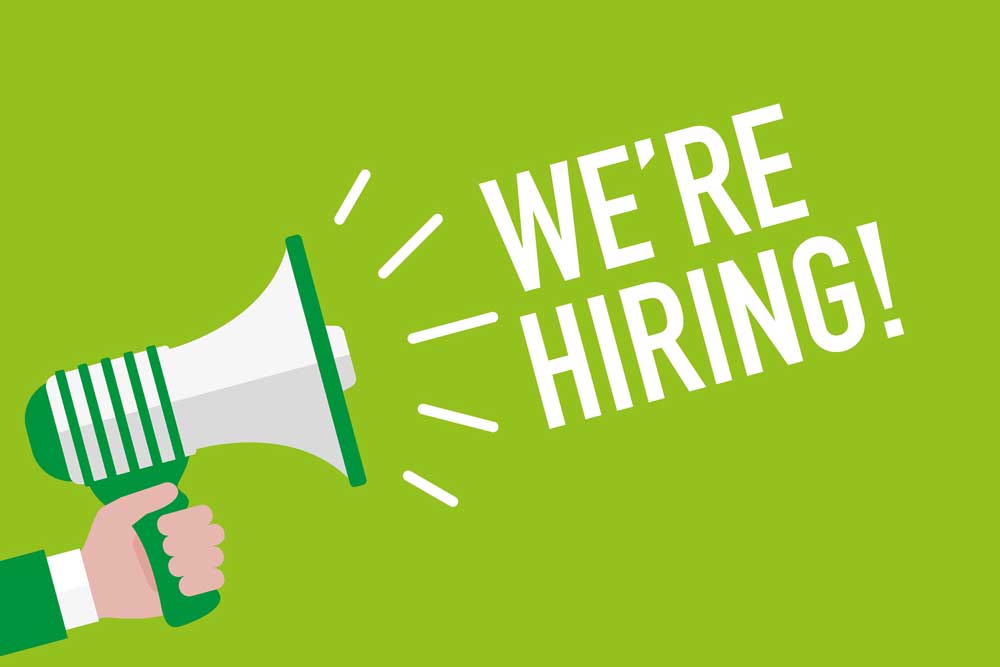 It seems everyone wants to work in the cannabis industry. Indeed.com found that in 2017, the interest in searching for cannabis jobs grew by 401% in the United States. In Canada, marijuana job searches grew by 320%, outpacing tech inquiries which only grew by 90%. 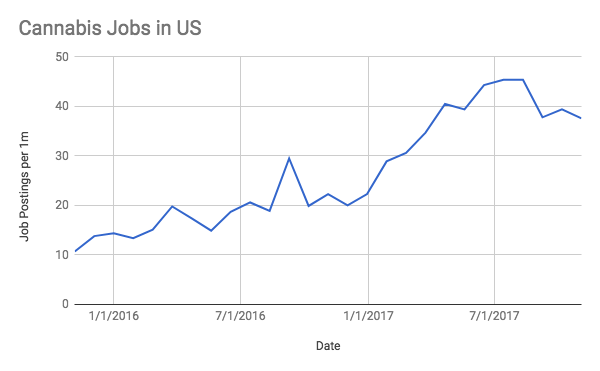 It isn’t only job seekers flocking to Indeed, cannabis employers have increased job postings by 251% since November 2015. No surprise, California is leading the pack with 33% of the cannabis job postings as the state ramps up for full legalization in January. Colorado is in second place with 15% of the job offerings, but 19% of the job seekers want those gigs causing a talent mismatch. In other words, demand is higher than supply. 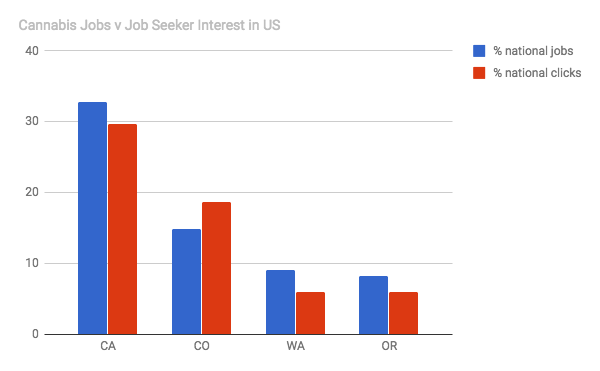 Karson Humiston, Founder of cannabis job recruiting firm Vangst Talent and the job board Vangsters said that at the beginning of the year there were 121,000 full-time employees in the cannabis industry and that number has now grown to 149,308. In 2016, she said the average salary was $47,620 and that has now jumped to $53,212.

“The highest paid positions we’re seeing right now are on the cultivation side,” said Humiston. ”A head grower can make $102,000 a year, plus a production-based bonus. If production goals are met, the employee can often get a 30% bonus.” She also noted that a new trend is that employers are willing to pay to relocate an employee to a newly legalized state. “Some cultivation employees feel that states like Colorado have a saturated job market and they prefer a new state where there are fewer people with such skills,” Humiston added. It’s more promising for one’s career to be the big fish in a little pond.

Another area that is in strong demand for cannabis companies is on the technology side. She noted that many people from Silicon Valley are shifting over to cannabis where the pay is becoming more in line with traditional tech companies. “We have 15 jobs to fill for Baker and 10 of them are tech jobs,” said Humiston. “We’re pulling from some well-known tech companies.”

Cannabis tech company Duber Partners found that for each employee in the cannabis industry there are 275 cannabis consumers. The jobs in the cannabis industry are also looking more lucrative than traditional jobs. For example, Duber found that dispensary budtenders (employees that assist shoppers in making purchasing decisions) make $7,000 more than bartenders. Cannabis grow masters earn twice as much as traditional farmers earn and concentrate extraction tech workers make twice as much as chemistry teachers. Breaking Bad’s Walter White chose the wrong product.

If you don’t live in a legalized state, you probably have no idea what these jobs pay. PayScale reviewed cannabis industry data and determined a median income snapshot for emerging jobs in the industry.

Marcie Robins, the founder of Kushie Jobs noted that many companies in California are waiting for the rules and regulations to be made official before committing to new employees. “Job seekers are really excited to get going,” she said. Another area that is growing in demand is culinary cannabis arts. “One of our job seeker’s is actually a classically trained Chef out of the cordon blue in Florence Italy,” said Robins.

The Intersection Of Cannabis And Traditional Jobs

Neither Robins or Humiston had any concerns about competition from Indeed. Both said they use the service and feel it just gives more credibility to the industry.

The Bureau of Labor Statistics currently has no coding in place to track cannabis industry jobs, but a spokesman for the BLS said there is still a plan to do so. It was originally expected to be rolled out by the end of 2017, but that hasn’t happened yet as the department awaits approvals for the new jobs coding.

While many legalized states have focused on the tax revenues that marijuana brings, new jobs could be the bigger bonus. The new jobs cause a ripple effect, where the employees begin spending their new income and the local economy improves as a result. The industry is also drawing workers that are ready to leave the traditional workforce for something new and exciting.