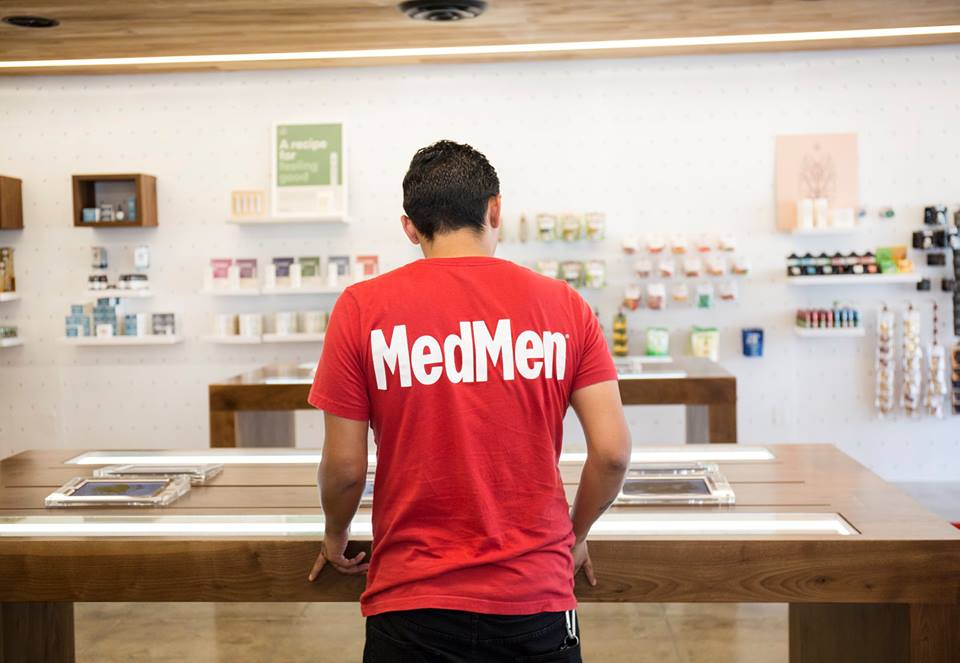 MedMen Enterprises Inc. (CSE: MMEN) (OTCQX: MMNFF) and PharmaCann, LLC made a big deal back in December of 2018 that MedMen would buy PharmaCann in an all-stock transaction. That deal, once valued at $684 million, is now off. MedMen is now saying that it will focus on leveraging its retail brand, its leadership position in California and its digital platform to grow the business will create greater shareholder value than the completion of the transaction.

The company said in a statement, “In connection with the termination, PharmaCann has agreed to transfer certain cannabis licenses and related assets in Illinois and Virginia to MedMen for no additional consideration from MedMen, other than the forgiveness of certain debt.” Basically, to cover the termination fee PharmaCann is giving up four assets:

“The cannabis sector has evolved tremendously since we first announced the PharmaCann transaction and based on the current macro-environment and future opportunities that exist for our business, we believe it is now in the best interest of our shareholders to deepen, rather than widen, our Company’s reach,” said Adam Bierman, MedMen co-founder and chief executive officer. “Looking at the PharmaCann portfolio today, Illinois has emerged as the most attractive opportunity for our longer-term, strategic growth plan. The addition of those assets, without dilution, is a win for MedMen and our shareholders.”

Four Weeks Ago It Was A ‘Transformative’ Deal

Just a few weeks ago Bierman was crowing about the PharmaCann acquisition and suggesting it was still moving forward. On September 10, he said, “Our transformative acquisition of PharmaCann will mold us into an even bigger and bolder company for our consumers. This acquisition doubles the number of states where MedMen has licenses, extending our geographic footprint and creating tremendous opportunity for our company and our shareholders. We are excited to be one step closer to closing the acquisition.”

On March 15, 2019, pursuant to the HSR Act, MedMen and PharmaCann each received a request for additional information from the U.S. Department of Justice Antitrust Division. On August 9, 2019, both MedMen and PharmaCann declared substantial compliance with this Second Request. On September 9, 2019, the waiting period under the HSR Act, which extended automatically for 30 days following both companies declaring substantial compliance with the Second Request, expired. That was when MedMen declared it had  green light to complete the deal.

The company also took this moment to announce that Zeeshan Hyder has been appointed Chief Financial Officer at MedMen. Mr. Hyder, currently MedMen’s Chief Corporate Development Officer, has been an integral part of the leadership team at MedMen since 2017, overseeing corporate development, investor relations and other financial growth initiatives. To date, Mr. Hyder has led over $300M in M&A deals executed, partnered with the CEO to take the company public and raised $500M in capital for direct investment into the business.

Hyder succeeds Michael Kramer, who apparently was terminated as of October 7, 2019. Kramer was only just hired in December of 2018 and he followed the previous CFO James Parker who only lasted a year and half and is currently suing Medmen for breach of contract.

Beleaguered California cannabis company MedMen Enterprises Inc. (CSE: MMEN) (OTCQX: MMNFF) announced unaudited revenue figures for the fiscal fourth quarter of 2019, ending on June 29, 2019. The company did not release any information as to net income or losses and considering each quarter the net losses have been extremely high, the lack of this information could be a red flag.

Systemwide revenue across MedMen’s operations in California, Nevada, New York, Arizona, and Illinois, excluding pending acquisitions, rose 15% sequentially to US$42.0 million. The company reported that gross margins were 50%, compared to 51% in the previous quarter. Pro forma systemwide revenue, which includes pending acquisitions that have not yet closed, totaled US$61.3 million. The company defined the pro forma as 37 retail stores that were operational at the end of the quarter and includes the recently announced pending acquisitions of operational retailers in Long Beach, California, and Vallejo, California.

“Q4 2019 was another quarter of solid execution for MedMen and a very strong end to our fiscal year,” said Adam Bierman, MedMen co-founder and chief executive officer. “Throughout 2019, we broadened our geographic footprint through strategic acquisitions, which leverage our existing corporate infrastructure as we enter new markets. Following the closing of pending acquisitions, we will be licensed for up to 92 retail locations across 12 states, and there is tremendous opportunity ahead to turn the balance of our retail licenses into revenue-generating storefronts.”

The second Tranche was expected to be for $75 million and that has dropped to $50 million. “The gross proceeds from the Equity Placement together with the remaining financing commitment under the Facility total US$155 million.” So, it is no longer $250 million. MedMen stock was lately trading at $2.10.

Last December, MedMen said that is was going to buy PharmaCann, one of the largest vertically-integrated multistate cannabis operators in the U.S. The FTC questioned that acquisition as part of its anti-trust oversight. MedMen said both it and PharmCann have provided all the requested information and still hope the deal will close by the end of 2019. “PharmaCann equityholders are expected to receive approximately 168.4 million subordinate voting shares in the combined company, based on MedMen’s fully-diluted shares outstanding as of June 29, 2019.” So far New York State has not approved of the MedMen acquisition of PharmaCann.

MedMen has been criticized in the past for its extremely high expenses. The lawsuit filed by the company’s former Chief Financial Officer James Parker detailed numerous unusual corporate expenses that disturbed shareholders. Now the company says that it expects to significantly surpass the targeted 20% reduction in its corporate SG&A expenses from its quarter ending December 2018, which totaled $164 million on an annualized basis. MedMen said it is now on track to reduce its run-rate corporate SG&A expenses by 30% by the end of the September 2019 quarter, or to approximately $115 million on an annualized basis going forward. Key drivers of this continued decrease in corporate SG&A expenses include i) general corporate cost savings, ii) strategic headcount reductions across various departments and iii) elimination of non-core functions and overhead in various departments.

California-based MedMen Enterprises (MMNFF) has acquired Pharmacann in an all-stock transaction valued at $682 million. The deal expands MedMen’s footprint in the Midwest and the East Coast as the race to become the biggest multi-state player heats up.
With the merger, facilities in Illinois, New York, Pennsylvania, Maryland, Massachusetts, Ohio, Virginia, and Michigan will expand the MedMen portfolio. Pharmacann will own approximately 25% of the pro-forma company, on a fully-diluted basis, at closing.
“This is a transformative acquisition that will create the largest U.S. cannabis company in the world’s largest cannabis market,” said Adam Bierman, MedMen’s chief executive officer, and co-founder. “The transaction adds tremendous scale to our vertically integrated business model by expanding our U.S. retail footprint across important growth markets while strengthening our cultivation and production capabilities. With the revenue synergies that the deal is expected to produce, MedMen is well positioned to continue executing on our growth strategy. This would not have been possible even two years ago and is a testament to how far both the industry and these two companies have evolved.”
Pharmacann is a medical marijuana operator with 10 retail stores and three cultivation and production facilities across multiple states. According to the company, MedMen’s network nearly doubles through this absorption with a portfolio of cannabis licenses in 12 states that will permit the combined company to operate 79 cannabis facilities, making them the largest cannabis company with a brick-and-mortar footprint in America.
Expansion
The recent acquisition moves are a distinct departure from the company’s original plan to stick with just the high-density locations of Los Angeles, New York, and Las Vegas. Head of Communication Daniel Yi said, “We get asked that question a lot. Our plan was to establish ourselves and create a solid position in the three key areas. Now that we’ve accomplished that, it’s time to expand.”  Yi said that the company believes that brick and mortar retail is where most cannabis consumers will gravitate and make their purchases and the company intends to capture that market.
This deal follows last week’s announcement in which MedMen signed an agreement to purchase Scottsdale-based cannabis company Monarch from WhiteStar Solutions. The company agreed to pay WhiteStar approximately 80% in stock and 20% in cash in an undisclosed amount. The stock consideration would be satisfied by way of issuance of shares of MedMen Enterprises, Inc.
MedMen also said last week that it was purchasing Chicago-based dispensary Seven Point for an undisclosed amount of cash at closing, deferred cash, and shares of MedMen Enterprises, Inc. Not done yet, MedMen closed a C$93,822,023 (US$73,275,000) senior secured term loan facility with funds managed by Hankey Capital and with an affiliate of Stable Road Capital as the largest loan participant.
Pharmacann
“PharmaCann has built highly-efficient cultivation centers and dispensaries to promote a better quality of life for medical marijuana patients,” said Teddy Scott, Ph. D., PharmaCann chief executive officer. “This acquisition validates the dedication and level of sophistication we have used to provide consistent patient outcomes. I am proudest of the top-notch team we have assembled here and their dedication to our mission of serving medical marijuana patients. Our organization is a natural fit for MedMen, and we are excited to join a leading enterprise with a best-in-class management team.”
Stock Performance
MedMen stock jumped almost 5% at the opening of trading on the news to lately trade at $4.40 on the OTC Market. The company is currently listed at roughly 70 million outstanding shares and with so many of these recent deals being done on the premise of issuing more shares, that number is expected to increase.
The company didn’t say at this time, what the amount of outstanding shares is expected to become, but company spokesman Daniel Yi said that issuing more shares to fund the company expansion was always part of the strategy.
CONTINUE READING