From Mesopotamia to ancient Rome, people have been infusing alcohol with cannabis for as long as cannabis has been around. In recent years, cannabis-infused alcohol has seen a resurgence of public interest, due largely to the spread of legalized cannabis in the United States. Most recently, the creators of Blue Moon announced that they would develop and release their own brand of craft cannabis beer.

But while cannabis beer and liquors have generated some interest, the bulk of the public’s attention has been centered squarely on the idea of cannabis wine, or cannawine as some call it, and it is easy to see why. Both cannabis and wine have a rich tradition of craftsmanship, which perfectly lends itself to the artisanal craft markets.

Perhaps the most famous brand of cannawine on the market at the moment is Know Label Wine Tincture, which is owned by singer-songwriter Melissa Etheridge. As the name implies, Know Label is technically not a wine but rather a “wine tincture.” The reason why it’s called a tincture is largely for legal purposes.

No U.S. state allows for the production of cannabis-infused alcoholic products. By calling Know Label a tincture, which is defined as “a medicine made by dissolving a drug in alcohol,” and by only selling it to medical cannabis patients, Etheridge is able to just barely skirt around the law. Other brands aren’t so lucky.

Currently, Know Label is the only product on the market that offers both THC and alcohol in one product.  Instead, most other “cannabis-infused” alcoholic products on the market, from cannabis vodka to cannawine,  will usually contain cannabidiol (CBD); a trend which Warren Bobrow finds disappointing and dishonest.

Known as the Cocktail Whisperer, Bobrow is a chef and mixologist who has made a name for himself in recent years as a cannabis cocktail guru. In 2016, Bobrow wrote the book “Cannabis Cocktails, Mocktails, and Tonics: The Art of Spirited Drinks and Buzz-Worthy Libations,” a how-to guide on creating cannabis-infused cocktails.

“They’re selling these hemp-flavored vodkas, and people see the marijuana leaf and immediately think they’re going to get high,” lamented Bobrow. “This is a product that has absolutely no THC, yet it is being framed as sold as something that gets you stoned, and I have a lot of difficulty with that.”

Bobrow went on to say that not only do many of these products pull a bait-and-switch, they’re also generally poor products to begin with. One brand in particular that Bobrow singled out was the California-based Mary Jane Wines, which he described as tasting like a “muddled mess.”

“The wine was out of balance,” added Bobrow. “There were no refreshing qualities and it certainly didn’t taste like something that I would be proud to serve on my dinner table.” 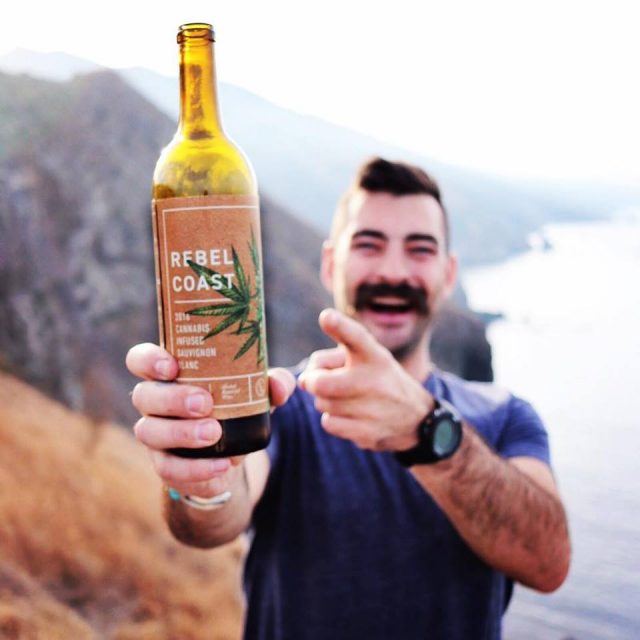 But while some try to pull a bait-and-switch or skirt the law by reclassifying their product, other brands are trying to redefine what cannawine means altogether, like Rebel Coast Winery. Offering a cannabis-infused sauvignon blanc, Rebel Coast sets its cannawine apart by taking out the alcohol and leaving in the THC.

To do this the company makes a normal batch of sauvignon blanc, which is then sent to a third party processor to remove the alcohol. The company then infuses the alcohol-free wine with cannabis using a proprietary process. According to Rebel Coast Co-Founder & Chief Operations Officer, Alex Howe, the end result is a product that tastes very similar to regular bottle but with a cannabis kick.

“One aspect that we have probably put the most time and resources into is making it taste it good, ” said Howe. “We’re trying to stay as close to the wine bottle experience as possible, we’re just swapping out one key component for another.”

Rebel Coast’s cannawine is not quite on the market yet, but you can pre-order a bottle online. Pending a successful rollout, the company hopes to start selling their cannawine in states outside of California where cannabis is legal.

So far that looks more like an inevitability than a maybe. The company has already received a large number of pre-orders for their cannawine, which Howe believes is thanks in large part to the massive consumer interest in finding an alternative to alcohol.

“I meet so many people who have either given up drinking or are looking to cut back on alcohol because they don’t like the negative side effects, and they’re looking for a better alternative,” said Howe. “I think a lot of people look to cannabis as that alternative.”

Not a big fan of wine? Not to worry, cannabis and hemp based beers are quickly coming to market. Stay tuned for when Green Market Report takes you into the world of cannabis beer.