Yvonne DeLaRosa Green received the Business Woman of the Year Award by the Industry Power Women (IPW) on November 16 in Las Vegas. DeLaRosa Green was honored with the prestigious award for her entrepreneurship and activism in the cannabis industry.

“I feel so honored to receive the first Businesswoman of the year award from IPW—it’s a culmination of a decade of compassionate care and activism and the beginning of a new era in the cannabis industry,” said DeLaRosa Green.

DeLaRosa Green first became acquainted with the medical cannabis industry when her mother was diagnosed with breast cancer. She was dismayed by the choice of dispensaries with which she had to take her mother, so she decided to open her own. After being awarded the first Cannabis Business License in Los Angeles, she opened an upscale dispensary and art gallery. 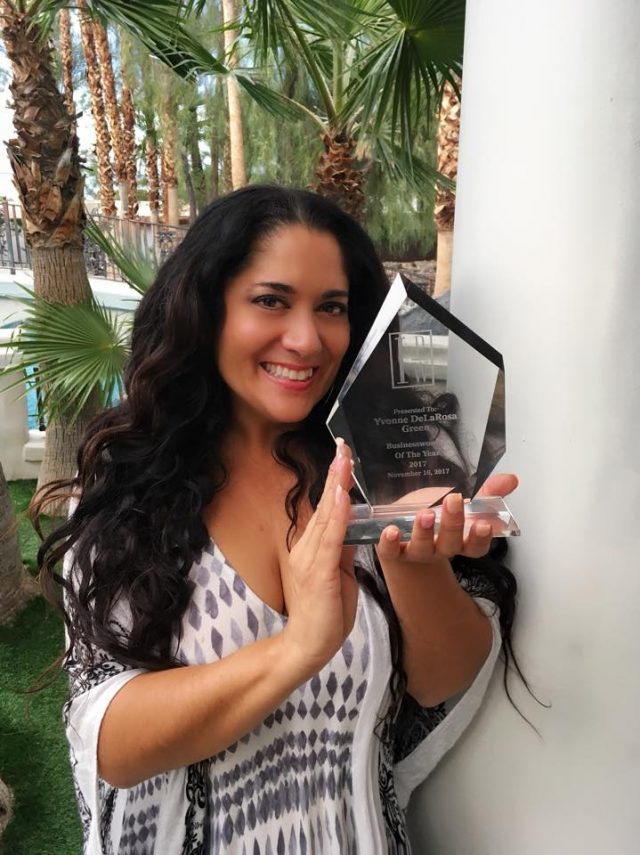 As founder and owner of 99 High Art dispensary in Venice Beach and 99 High Tide in Malibu, DeLaRosa Green is not only one of the few minority dispensary owners in Los Angeles, but she’s also the owner of the only licensed dispensary in Malibu. 99 has been named one of the best dispensaries by Rolling Stone Magazine, LA Weekly and High Times Magazine.

DeLaRosa Green is also a celebrated actress and activist who uses her position as a celebrity to educate others on the cannabis industry and the benefits of cannabis. She is a shrewd businesswoman, compassionate advocate, and pioneering activist—all reasons she was named the IPW Business Woman of the Year.

The launch event was a brunch with mimosas the same week as MJBizCon, the biggest cannabis industry event in the country. They presented three awards to women who have broken boundaries and who continue to lead the way for women in the industry, including The Business Woman of the Year award, Influencer of the Year, and an award for Leadership.

“The launch at MJBizCon is important because last year the issue of how women are viewed was encapsulated by the scandal #meatgate, where an edible company covered a woman with deli slices as a platter,” said co-Founder Ophelia Chong. “This year, the launch of IPW shows the power women have, the changes we have made, and most importantly, that we do this because the industry does not deign us a piece as a ‘feel-good’ move. It is because we are a major part as entrepreneurs and consumers and should be recognized as so.”

IPW is an organization created in 2017 by Cynthia Salarizadeh, founder, and CEO of the Salar Media Group, Debra Borchardt, founder of the Green Market Report, and Ophelia Chong, founder of Stock Pot Images, to offer women in the cannabis industry networking, support, and camaraderie.

Peggi Clough is a freelance writer and editor whose clients have included Hallmark Cards, Cerner Corporation and Village Voice Media. Prior to freelancing, she was an editor for National Seminars Training. Peggi is committed to fighting for the legalization of medical cannabis in her home state of Missouri.

previousCannabis Stocks Jump Over 40% In November